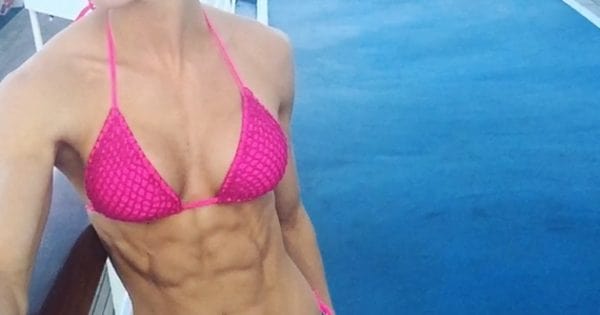 How to Eat Healthy when on Vacation

I recently rang in the New Year with my family onboard a weeklong cruise to the Caribbean. But if any of you know how hard it can be to stay on a healthy eating plan when on vacation, a cruise would be the mothership for diet disaster (pun intended).

Cruise ships are notorious for being all-you-can-eat binges that leave passengers feeling ship-like themselves. According to the polls of several online cruise reviewers, the average weight-gain on a 7-day cruise ranges from about 5 to 10 pounds!

My ship had “complimentary” dining options (after you purchase your ticket onboard of course) that served you as much food as your little heart desired. These unlimited food options consisted of two main dining rooms which served brunch and dinner on most days, an all-you-can-eat buffet (wouldn’t be a cruise without one), a burger joint, Mexican cantina, pizzeria, deli, and last but certainly not least: an all you can eat soft-serve ice cream machine at multiple ends of the ship! And that was just the “free” options… 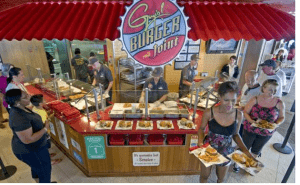 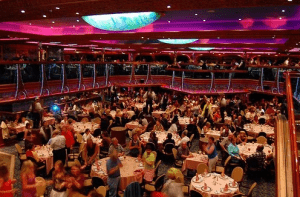 It truly seemed like people enjoyed shoveling endless amounts of food down their throats more than anything else on the cruise. I would guess about 75% of the passengers onboard to be overweight with a large percentage of that also being obese or morbidly obese. Now I’m in no way fat-phobic or have anything against people who are overweight, but obese five-year-old children walking around with their all-you-can-eat ice cream cones in their hands… come on people.

You could also pay a surcharge to eat at some of the higher end dining options such as The Seafood Shack, The Point Steakhouse and The Chefs Table. Out of all of the places to eat on the cruise ship, the options you had to pay for probably had the healthiest choices:

At the Seafood Shack some of their healthy options consisted of boiled or steamed lobster, crab, and shrimp, raw oysters, and a whole-fish catch of the day prepared anyway you wanted. There were also the less-healthy options such as fish n’ chips, a fried seafood platter, fried shrimp, and clam chowder. But, all in all, I gave this option four out of five stars for having good, clean protein sources without most being smothered in added unhealthy fats.

The Point Steakhouse was probably my favorite place to eat onboard. My boyfriend, Chase, and I ate there on the first and last night on the cruise. The menu consisted of an appetizer, salad, entrée, and dessert for each person. Starter options consisted of escargot, grilled Portobello mushroom, beef tartare, shrimp cocktail, tuna tartare, or French onion soup. Both nights I had the tuna tartare just because I’m a big fan of the dish. The salads were pretty basic—salads. I just asked for my dressing on the side to avoid it being overly drenched in added fats. For my entrée I had the same thing both nights: I noticed they had an option for a Surf N’ Turf of 4 ounces filet minon and 4 ounces lobster tail. I love lobster tail but I also noticed they had an entrée of just sea bass on the menu, which is my absolute FAV! So I asked the waiter if I could get the Surf N’ Turf with the filet minon and sea bass instead of the lobster, which they kindly obliged to. I want to note, however, that when ordering my entrée I also asked the waiter to cook my protein without ANY added fats—so no butter or oil. Believe it or not, restaurants usually will cook your steak with butter and your fish in oil to make it taste oh-so-much better, but highly unnecessary for the waistline. My protein was also accompanied with some steamed and lightly seasoned broccoli (just the way I like it)! For dessert, Chase and I decided to take a pass because we were already having some delicious red wine with our meals, but truthfully, I probably wouldn’t have had the dessert anyway after such a large meal. 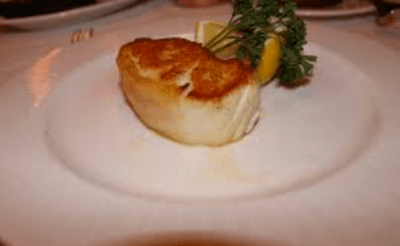 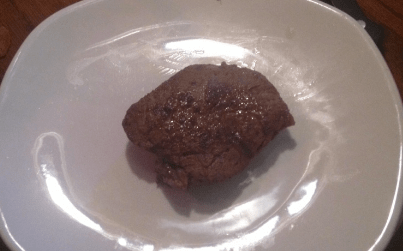 On night two of the cruise my boyfriend and I ate at The Chef’s Table without knowing beforehand it consisted of 4-mini taste appetizers, an 11-course meal, and dessert. A had a pretty rough time at this event… Although it was pretty interesting getting to see some of the behind-the-scenes of the kitchen and what goes into the production of all of those meals being served for the ship. Our four appetizers consisted of a mango sphere on rosemary biscuit, salmon tartar wrapped in a sesame cone, and beef carpaccio on a fried puff with chocolate bacon. I ate the mango sphere and had a bite of the rest of the appetizers but did not finish them like most of the people there. For the main courses they served in order: a beet blanket with spiced grape tea, crab stack with corn custard, duck with creamy parmesan quinoa, creamy tomato bisque with buttery cream cheese, sea bass with chorizo and corn pudding, and wagyu beef with bone marrow soufflé. Although these entrees were very small, they were all very rich and loaded with fats and carbs. I basically ended up doing the same thing as with the appetizers and just ate a bite of each course and a fair amount of the protein if it wasn’t fried or mauled by cream and butter. Dessert consisted of a sea salt praline chocolate, raspberry mojito, key lime cake, apricot vanilla gel, and citrus cream. WOWZA that was a lot to type, not to mention eat! I mean can you imagine?! I don’t even know how many calories would be in that entire DINNER but I’m sure well over a few thousand. For dessert I had one bite of the chocolate, and after a three-hour long dinner I was ready to get out of there. 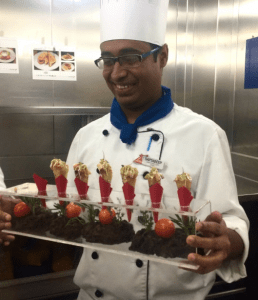 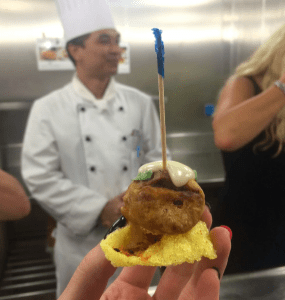 For the remainder of the cruise I did what I do best. I made due with what was available and came up with the healthiest options I could for each meal. Although I did not have my food scale, after years of weighing out food I had a pretty good idea of how to eye-ball my serving sizes. I tried to stick to my normal eating times as much as possible, which wasn’t difficult since there was food available at all times of the day.

For breakfast I always ate at the buffet. During this time they had everything from sausages and bacon, cereal, sweetened yogurts, fruit, and endless amounts of pasties and breads. I found the best option to be at the omelet station where a cook prepared eggs anyway to liked. Waiting in line for my omelet I noticed right away the cook first spraying the pan with Pam and then proceeding to douse the pan in some sort of oil (I’m assuming it wasn’t coconut or olive oil either). When it was my turn to order I asked the cook to not use any oil and just a smidge of the spray oil to avoid my eggs from sticking to the pan. By doing just this I probably saved about 190 calories if the cook was pouring a good two tablespoons of oil on those pans. I then asked for egg whites instead of the regular eggs and asked him to double it (his scoops were very small and I’m used to 8 ounces’ of egg whites for breakfast.) After I added spinach, tomato, mushroom, and a little ham. On the side I had a scoop of oatmeal that I sweetened with my own Stevia that I carry around with me always.

During lunchtime we sometimes ate at the buffet or at one of the dining halls. During this time I looked for a simple (without a bunch of ingredients added) lean protein source and non-starchy veggie. If they had a starchy carb available that wasn’t all doctored up, such as a plain potato as apposed to hash browns or cheesy potatoes I would add a small amount of that in as well. But I basically ended up going pretty low carb for these meals because it seemed like the carbs they had were never just plain.

Snacks varied during the cruise. Some days I had a ProSupps My Bar that I had brought with me. Other snacks were things such as apples with PB2 (also brought with), cottage cheese with a little fruit, or another egg white omelette.

For dinner, besides the nights we ate at The Point Steakhouse or The Chef’s Table, we would eat at the regular dining room. Although the food here wasn’t buffet style, you could still order as many appetizers and entrees and desserts as your heart desired. But because a lot of the meals here had set sides, such as the chicken breast came with parmesan and garlic mashed potatoes, I did my best to get alternate sides for the entrée I wanted. I usually ordered either the salmon, chicken beast, or lobster tail because they were the simplest protein options. Broccoli was the only veggie on the menu the entire cruise that they would prepare steamed versus coated in whatever oil they were using to cook the rest of the veggies in. So I had a lot of broccoli with each of my meals. Again my dinner was lower carb than what I am used to at home but I probably was making up for the extra calories in the few glasses of red wine I enjoyed. And I did not have any dessert the entire trip, besides maybe a bite while I was at The Chef’s table

When I got home from the cruise I hopped on the scale to see if anything had changed from a week of not tracking and basically eating out for every single meal. And I was pleasantly surprised that the scale did not budge even an ounce! I was the exact weight as I had been before vacation. During the cruise I had just focused on making healthy choices and creating proper serving sizes. I also stuck with a workout routine, which definitely made a difference. I got up every morning but one while on the cruise to get in a lift. The boat didn’t have much of the equipment that I usually used during my workouts (no squat rack, barbells, or cables) but just endless amounts of cardio equipment and some standard machines and dumbbells. But I got in a workout nonetheless and made due with what I had available! Also, starting each day with a workout helped to start my day with a positive mindset and stay on track with my goals.

After this vacation I can officially attest that it is possible to stay on track and not gain ANY weight when vacationing, even on a week long all-you-can-eat floating feast of a cruise. So if you’re planning on going on a vacation, these are some tips that I would recommend following to help avoid gaining any weight: 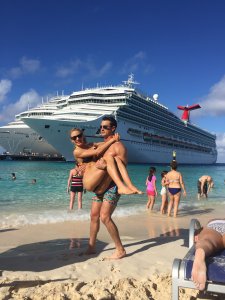 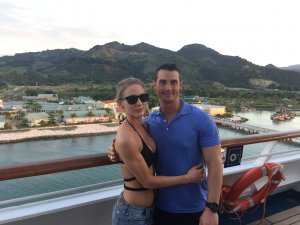 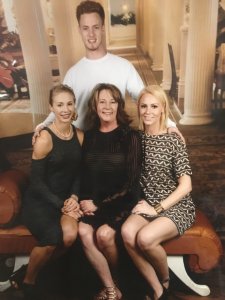 Rachel Scheer is a Certified Nutritionist who received her degree from Baylor University in Nutrition Science and Dietetics. Rachel has her own private nutrition and counseling practice located in McKinney, Texas. Rachel has helped clients with a wide range of nutritional needs enhance their athletic performance, improve their physical and mental health, and make positive lifelong eating and exercise behavior changes.

Rachel Scheer is a Certified Nutritionist who received her degree from Baylor University in Nutrition Science and Dietetics. Rachel has her own private nutrition and counseling practice located in McKinney, Texas. Rachel has helped clients with a wide range of nutritional needs enhance their athletic performance, improve their physical and mental health, and make positive lifelong eating and exercise behavior changes.